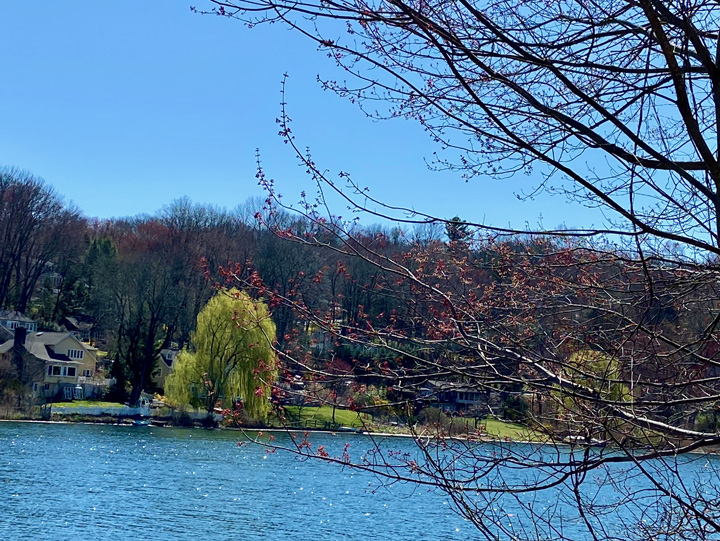 Walking helps the weeping. Springtime brings a little something new to notice each day. Mostly I’m swept up in that touch of green-gold on just-budding leaves.

Typically halfway into my walk around the lake endorphins kick in. My gaze shifts from the ground to the trees and sky. Nests show themselves. The worrying, intrinsically linked to the waiting, eases up. Today I passed a mother walking with a two-year-old. “Oh what I’d give to see the world through his eyes,” I said from a safe distance. The mother smiled.

“A seed knows how to wait,” writes Hope Jahren in Lab Girl.

“After scientists broke open the coat of a lotus seed (Nolumbo nucifera),” she notes, “and coddled the embryo into growth, they kept the empty husk. When they radiocarbon-dated this discarded outer shell, they discovered that their seedling had been waiting for them within a peat bog in China for no less than two thousand years. This tiny seed had stubbornly kept up the hope of its own future while human civilizations rose and fell.”

An odd irony to be reading these words in these times. Waiting tests our patience, whether in a doctor’s office or sitting in my home office wanting to scream about an Internet that seems slow today, no reason other than a traffic-jammed information highway.

This waiting is about wanting to wake to tomorrow with the promise of an end to corona in sight.

Just now a sigh. I’m looking out my window, leafless tree branches swaying. I’m waiting for words, the right ones.

Don’t words too often fail us when we most need them?

Jill Lepore, in a recent New Yorker piece:  “Every story of epidemic is a story of illiteracy, language made powerless, man made brute.”

There’s a higher frequency both in the nature and number of text messages. One day a friend sends me a link to a man speaking Italian while demonstrating how to use a sanitary pantiliner as a mask. Another day she alerts me to the death of Bill Withers.

In texts with my daughter we can go so easily from conversations about shoes and trinkets and the local stores we want to make sure survive to despair over the need for convention centers to be turned into makeshift hospitals.

I glaze over numbers—is it really possible that the death toll in China is closer to 40,000, not the 3,500 reported?

It’s the individual stories that get to me most: The single mother holed up with her two-year-old. Patients struggling to breathe with lungs that sounded like sandpaper.

I suffer from supermarket stress. Get in and out as quickly as possible. Hope that I’ll find what I need. I hate wearing this mask. I hate that I have to ask the woman at the checkout counter to repeat what she said. Her mask muffles her voice.

The other day there were three pairs of swans on the lake. Over the years just one pair.

Today it’s a swan convention, five pairs of them.

I hear more birds each day. They keep me from thinking. They remind me of something I read many years ago. Before words, we communicated through sounds. We made music.

My husband knows just the thing to make me laugh at night. Seinfeld reruns work like a charm. The other night a Netflix special, Dave Chappelle being honored with the Kennedy Center Mark Twain Prize for American Humor.

Today my husband tells me he was kept awake during the night with thoughts of a Russian takeover of our country. He’s convinced The Manchurian Candidate is in the White House.

“You’re starting to scare me,” I tell him. He’s troubled, too, about the rise of anti-Semitism worldwide.

I’m troubled that I can’t get a kosher chicken and brisket from the local butcher. Passover is days away. There won’t be the usual gathering of close friends and family at our seder, just the two of us.

My mother died during Passover. For years I could not recall the solar calendar date (April 8), only the lunar (Jewish) calendar date, 15 Nissan. This year brings synchronicity to the two ways of marking my days.

My daughter amuses me with a text about how Larry David, our favorite curmudgeon, copes during corona times. Today she texts me an alert from the White House COVID-19 coordinator re: avoiding supermarkets and pharmacies.

I take it all in, the worrying and the weeping. And I ask myself, by not rushing out to buy chicken and brisket a week ahead of time, am I simply being my normal, pre-corona-anxiety-stricken self? And isn’t that a good thing? If it turns out I don’t get what exactly what I want for a Passover meal, I’ll. make do with what I get.

New York State reported a drop in the death toll (594 new deaths, down from 630 the day before). The governor says it could be a ‘blip.’