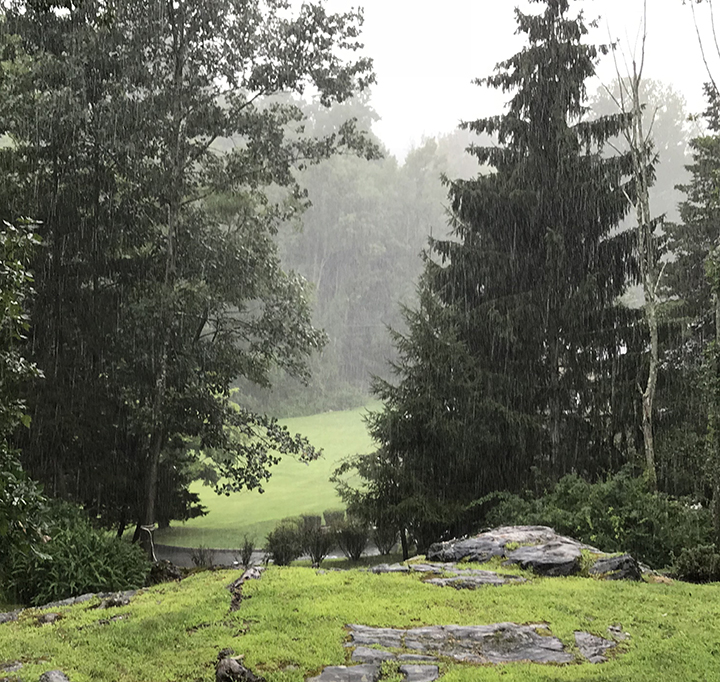 This morning had me scrambling outside for a walk during a brief break from the rain we seem to be getting a lot of lately.  Scattered thunderstorms are a summertime staple, the operative word being ‘scattered.’ Rolling thunder. Lightning bolts cracking through the sky, as mystifying and beautiful as they are frightening. Pounding rain that comes and goes, too many days of which can dampen a person’s spirit.

I remember reading long ago about a tribe that runs into the rain instead of running for cover the way I do. This was pre-Google and I can’t track down the essay but I do trust the impression it left in my memory. Then there was MoMA’s enchanting Rain Room exhibition a few years back that had visitors walking through rain without getting wet.

In my day-to-day walks, I can handle light rain, almost welcome it on a hot, summer day.  I can even laugh, when I’m caught in a downpour, at my reliance on the hour-by-hour know-before-you-go weather report I check too regularly. Tell the truth—how many times have you heard or said these words: It’s not supposed to rain?

We can’t help ourselves, can we?  We know there’s really nothing personal about weather.  We need rain as much as we need sun.  We can’t will away the less-than-welcoming forecast during a vacation on Ibiza. We can only hope for the one constant: everything, including weather, changes.

Children are on my mind a lot these days.  Truth be known, they’re always in my mind if not at the top of consciousness. But today, caught in a brief shower (despite the ‘beat the rain’ game I’m playing), I’m picturing immigrant children separated from their parents doing their best to come out and play, rain or no rain. I’m feeling what any decent person with a heart feels re: the heartlessness of an administration that has inflicted this confusion and pain on children.

I’m hearing a toddler crying in a courtroom and a judge embarrassed to ask if he understands the proceedings.

I’m seeing the helplessness on the face of a woman, one of more than 450 sent back to their countries without their children.

Despair is not an option.  If nothing else, wishing away the stream of lies (with or with the sex and videotapes) about everything, hoping to wake up one day and breathe a sigh of relief at seeing an end to the collective nightmare acknowledges the reality of how suddenly things can change.

Ten minutes ago it was pouring. Now the sun is out.  Change of the political and cultural kind tends to me more gradual, so much going on in the shadows, as the brilliant Rebecca Solnit reminds us in her reissued book of essays, Hope in the Dark. She tells story after story of an “inspired” activism, one that finds common ground between parties normally on different sides of the ‘us and them’ fence.  In lieu of the fall from grace paradigm that sets paradise as the bar for an ideal world, she posits the Coyote/trickster motif, in which there never was a fall or a state of grace but creation is ongoing in a world originally brought into being by “flawed, human creators who never finished the job.”

I may not feel much like singing in the rain these days but my spirit gets a little boost when I read about a caravan of grandmothers making a six-day trek to the Mexican border in support of migrant families being held there. Rallies are planned in strategic cities along the way.

Not for nothing, a new body of evidence suggests the crucial role of grandmothers in our evolution. In this emerging view, papa out hunting animals with his bow and arrow gets no more (possibly less) credit for our survival as a species than mama and grandma digging for those heard-to-unearth tubers.  Better yet, grandma, with her big eyes and wise heart, may hold the key to the communal spirit, not to mention nurturing, that allowed us to evolve as humans. 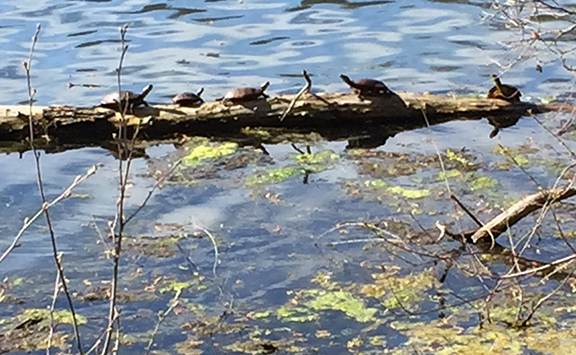 Sometimes, in the rare moments when my brain is not in overdrive, I imagine myself walking through a View-Master. Virtual reality (not to mention the advent of 3-D movies and 4K TVs) may have turned that charming device from my childhood into an anachronism, but memory retains the magic. I still have one, purchased when my daughter was young and we were all not yet in the grip of technology.   If updated models (including apps available for download) are any indication, maybe it’s not just nostalgia being marketed here. Isn’t there something inherently mysterious and wonderful in the intimacy of putting a red plastic device up to your eyes and watching scenes unfold?

In the beginning, the more I think about it, was the image, not the word. How could all that light come into existence without picturing it before giving it a name?

I have a thing for the color blue. I also have a husband with his own design-specific tastes (a talented guy at that), which makes it all the more meaningful that he ‘acquiesced’ to my

request for a blue carpet in a renovated room I’ve dubbed my tree house, since I really am eye level with trees up here. I take nothing in my life for granted and count it among my blessings to have a personal go-to place for yoga/meditation, listening to music, reading, or just breathing.   I take great pleasure, too, in giving friends who come to visit a serene room of their own.

Some things are reassuringly consistent. The calendar announces the spring equinox. Outdoor temperatures may have us saying the season has arrived ‘early’ or ‘late’ but either way perennials really do come back, bulbs blossom and those turtles lined up like sunbathers on logs tell me what I most need to know about renewal. They are always pretty much in the same spot on the lake and I always stop to marvel at the scene. Invariably they sense my presence, as quiet as I try to be, and one by one they drop into the water.

Why is the sky blue?

Every child inevitably asks the question, and scientific explanations never quite cut it. Growing up with a father who loved to sing (a reality I would turn into fiction), I was always touched by the answer Cab Calloway gives his daughter, Lael, in their ‘Little Child’ duet. Lael also happened to be my mother’s name.

That was then/this is now. My father and mother are gone, and it always requires some mathematical calculation to mark the passing time, almost sixteen years for him, twenty-three for her. It does not seem like yesterday.

Sometimes I feel a little lost, not a bad thing, Rebecca Solnit reminds me in her luminous book, A Field Guide to Getting Lost. The very first essay, “Open Door,” plunges the reader into the experience of a young girl at a Passover seder. I’d be hard put to ever see the horizon in the same light after reading “The Blue of Distance.”

“Blue is the color of longing for the distances you never arrive in, for the blue world,” she writes. She makes poetry of science here: the blue that colors the horizon is in fact light that doesn’t travel the whole distance from the sun and becomes “the light that gets lost.”

In the realm of meditation, the throat chakra manifests as blue. It is the seat of self-expression. Voice. Even a brief moment of seeing it (or, for that matter, any color in the chakra spectrum) takes me from lost to found.

It’s a balancing act, indeed. Going inside oneself, quieting the internal chatter. Coming out, hopefully with a deeper sense of presence and ease to bring to any conversation around any table. For those turtles on a log balance is second nature. As totems, turtles call up perseverance and longevity. Be the turtle coming out of its shell, a yoga teacher of mine was fond of saying. That protective armor we carry on our backs is as real as it is a metaphor. One day it hit me with the force of revelation: they’re not just slow, steady creatures. They swim, too.

Speaking of totems, was there ever a tree more alive in its deadness than this one, playfully

posted on Facebook as my updated profile photo? Somehow it tells me that the past is always with us. If you’re lucky, the weight of it is off your back, freeing you to be present to the moment and open to the future. To put it more eloquently (again, Rebecca Solnit): “Some things we have only as long as they remain lost, some things are not lost only so long as they are distant.”