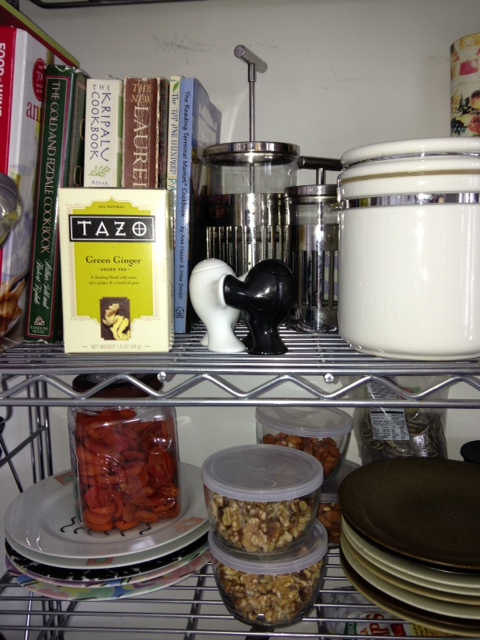 My husband is about to sink his teeth into a thick pastrami sandwich, a favorite of his. Not a big deal in the grand scheme of things, and not the first time I’ve witnessed the joy he takes in foods not high on my list of culinary delights. Only today – Day #1 of my two-day juice fast – brings a certain smile of irony to the scene.

He’s also picked up some fried chicken for dinner, and what I’m experiencing (having just finished my second ‘meal’ of the day (a blend of carrots and beets) is akin to watching a child set free in a candy store. It’s not that my husband doesn’t enjoy my cooking.  His taste in fish is not as broad as mine, but he’ll eat it (more readily in the summer when we grill), especially if I come up with a way to mask its ‘fishness’ and serve it up with some grain or pasta. Speaking of which, there’s no subtlety when he comes home from the supermarket with the stuff that (good) meatballs are made of. What’s there not to love about a dish so satisfying you get more than one night’s dinner out of it? Chicken – in its myriad manifestations – is  always the compromise,  the go-to protein when he’s not in the mood for fish and I’m not up for the red meat. Not that I don’t enjoy it.

It may a tad simplistic, but here’s a question I was recently asked: Do you live to eat or eat to live?  A metaphor, for sure, and one that suggests even more subtle layers nested in our relationship with food: do you savor what you eat or is breakfast/lunch/dinner a by-the-clock ingest/digest affair to fuel you up for  whatever it is you do between meals? I’m far from a purist in my eating habits – I buy organic when I can and when it’s good, but not always; a very satisfying sweet for me would be almonds and raisins, though I’ll gladly take a few chocolate-covered Raisinets my husband offers while we watch a movie on TV;  salt could be my undoing (you’re a better person than I am if you can stop after one potato chip or tortilla strip).

It boils down to that thing we call ‘appetite,’ never really a stand-alone word. It’s either voracious or poor, easily sated or hungering for a flavor so elusive it can’t even find its way to the tip of your tongue.

Except when you’re on a juice fast, in which case you already know what’s coming. Six juices a day, freshly pressed, approximately two hours apart. Water and green tea in-between helpings.  I start the morning with green juice (cucumber, celery, kale, spinach, fennel, green apple, lemon). Two hours later, a little hunger kicking in, I take the carrot-beet juice from the refrigerator, the color of which calls up the coveted “V” on the TV series, “True Blood.”  (It may not have the power vested in vampire blood, but it’s a got a sweet kick of its own.)  Next comes lemonade (lemon, aloe, ginger, apple), possibly my favorite.  Another green, another carrot-beet, and, the last drink of the day, Almond Coconut Chia Mylk (lovingly called dessert).

These are not drinks you gulp down, and that’s partly the point. Drinking slowly I taste the celery and apple in the green drink, the carrot cutting through the beets, the ginger in the lemonade, the sweet sweet almonds laced with vanilla bean. Go ahead, laugh, it ain’t wine even if I’m drinking as if it is.  But it is a kind of paying attention. When I fast each year on Yom Kippur, not even a glass of water, I’m brought to a place of connection with a cultural heritage I cherish; for a minimally practicing Jew like myself, what better way to remind myself that the hunger I may experience for one day is something too familiar to too many people in the world? And theirs is not self-induced.

Fasting on juices for two days, at least the first time, is little more than a chance to give my body a break from routine eating and see how I hold up. Aficionados swear that the benefits (digestive and otherwise) far outweigh the sometimes uncomfortable symptoms that accompany detoxification. There’s a science to it, after all (skeptics may beg to differ). We each have our predispositions and mindsets, our inclinations toward the Western fix-me-with-medication modality and the Eastern/alternative help-the-body-heal-itself paradigm.  Somewhere betwixt and between rests simple common sense, and on the food front there’s no better proof of that than recent findings re: the Mediterranean Diet.

My husband munches away, I sip. Slowing down, paying attention.  To the ways in which I stop thinking about food when there are no meals to prepare.  To the diversion of energy spent preparing meals to time spent nourishing myself (a little more reading, writing, maybe even a nap).

To the  difference between a hunger that cannot be satisfied and one that is no more than gently gnawing.  To that thing called appetite, which, like a begging dog, seems to be quelled when it isn’t given what it has been programmed to want. The mind is a funny thing. In an experiment conducted by the infamous Dr. Oz, two groups of people were presented with bowls of candy. Group A was told to imagine eating all the candy, Group B to imagine drinking water, after which both groups were invited to eat as much of the candy as they wanted. Apparently Group A ended up eating 40 percent less of the candy in front of them.

Perhaps you are what you eat, perhaps not. This much I can say.  After two days of being juiced up,  my taste buds did not have a hankering for that Morning Glory muffin at a favorite café or even the olives my husband bought to go with my reentry couscous/chick pea salad. That’s not to say I don’t welcome chewing food again. Not to mention that glass of Chianti (my first in a week) I’ll be savoring with the Chicken Marsala I’m cooking tonight.