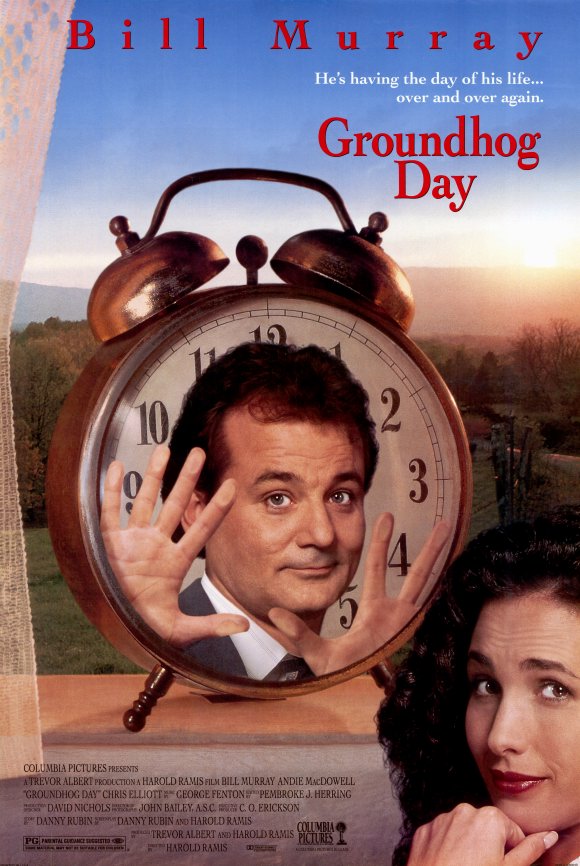 Certain days/moments in your life are marked by instant recall—details as crisp and clear as the joy or sadness they give rise to—no pentimento shading of memories.  Of all the profound things to recall about the day my daughter became a Bat Mitzvah, what I hear now, across the years, is the president of the congregation sharing some words I’d shared with him. She inspires me, I’d said.

Sunday the groundhog saw his shadow, though it’s really a no-lose scenario for the critter. We know spring is coming, give or take a week, but we take delight in a tradition that reassures us.  As a metaphor made manifest by a movie, Groundhog Day is as much a reminder of seasonal change as it is about the places we get stuck.

In her latest post, my daughter makes an argument against New Year’s resolutions, futile and fleeting as they are, and a strong case for the no-quick-fix solution known as lifestyle change—thoughts that sparked in me a riff on that place called midlife, where the balance between looking back and looking ahead plays tricks on me. We have dreams, we delineate goals, we set in motion the wheels for achieving those goals.  If we’re feeling stuck, there are any number of strategies for getting past the feeling or at least seeing it for what it is.  More often than not, Rumi comes to the rescue for me.

When you go through a hard period,
When everything seems to oppose you,
When you feel you can’t bear even one minute,
never give up
Because it is the time and place that the course will divert.

Sometimes dreams give us messages. We also have life coaches to get us on track.  We read books reminding us of lives we could never possibly live, maybe all the more powerful for that very fact. I recently read The Industry of Souls, by Martin Booth. It’s a brilliant, profound novel and I have Claire McAlpine to thank for leading me to it; it’s what she does so well—shining a literary light on books, often those lesser known gems. The protagonist here is an Englishman who survived twenty years in the gulag.  Of the many exquisite, pithy, poetic phrases I marked, here’s one:

These are words worthy of a Passover seder, indeed.

More to the point, I live a life as far removed from the gulag as it gets, even with an exceptionally snowy winter.  It’s a good life, and I need little reminder to count my blessings.  But even the best of lives are riddled with longings unsatisfied, dreams unrealized. What happens when you wake up one day and what you hear is a resounding  ‘no más’?

Metaphor aside, Roberto Durán never actually said those words—he attributes them to the referee, according to a recent documentary—but his body language said it all.  It was two minutes/forty-four seconds into the eighth round of his rematch with Sugar Ray Leonard. He wasn’t prepared for the fight, threw up his hands, turned his back on his opponent.  Had he been in shape, my husband has little doubt he would have beat Sugar Ray Leonard again.  Who am I to argue?  He’s the sports maven in the family. I write the words.

From Leonard’s perspective, he was deprived of the glory of a win, not to mention some clarity/closure on why his rival quit. Durán would like to be remembered for the good fights he fought, not the one he walked away from.

There are any number of metaphors that can be visualized to depict struggles. I often see myself on top of a mountain, not really clear how I got there. Boxing, brutal as it is, reminds us we fight for what we want, we hit below the belt, we’re saved by the bell.  It’s not just the power of a punch, it’s fancy footwork we need too. Until one day we contemplate throwing in the towel, no más. We start thinking about the two roads we faced at twenty-something, and the way they diverged and the inevitable question: did I take the wrong one?

Or maybe there is no wrong road, just an endless loop of waking to the same song every morning, until one day, like the arrogant fictional weatherman Phil Connors, we figure out what it takes to break the karmic trap.  A Buzzfeed post re: 12 Things You Probably Didn’t Know about ‘Groundhog Day‘ tells me Bill Murray was bitten twice by a groundhog during the filming and Director Harold Ramis wanted Tom Hanks for the lead role but he was ‘too nice.’  Certainly would have been a different movie.

Often, change doesn’t come trumpeting itself in. It comes in quiet, barely noticed ways. No bolts of lightning and grand entrances here. Just a subtle relaxation into the body. A tiny shift towards where you are. An old belief, an outdated story, seen for what it is. A new path emerging in the darkness. A vague, unspeakable hope dawning in the first light of the day you imagined would never come. Everything the same, everything different, everything always resting in motion, and the mysteries of change forever unresolved.—Jeff Foster