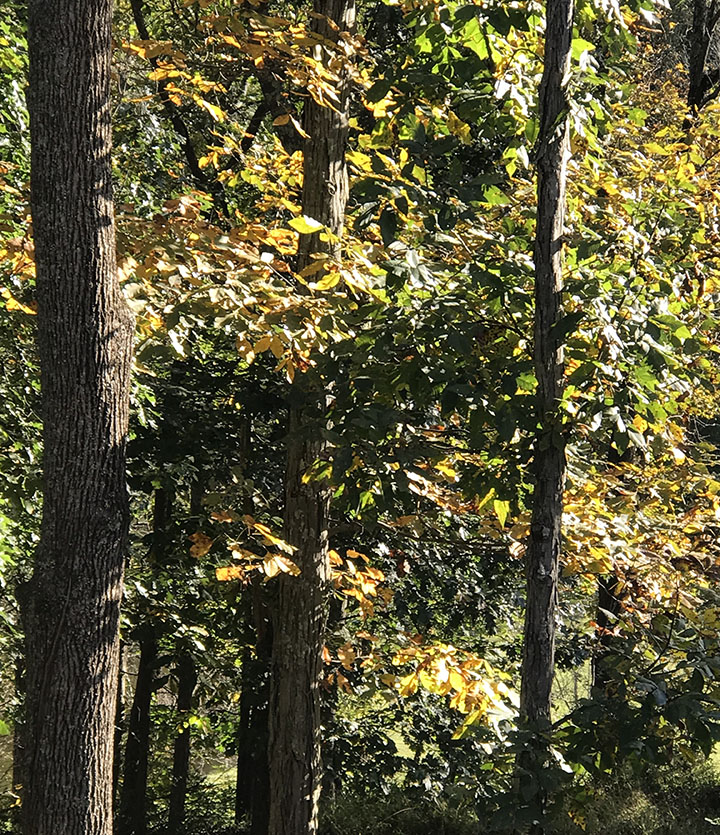 Tonight, barely 7 p.m. and the sky is ink blue.  A crescent moon casts its spell.

To be in sync with the seasons is to be reminded that autumn is tinged with the stickiness of nostalgia. To feel melancholy goes with the territory. That rich palette of colors the leaves offer up is the gift we get before they fall to the ground. Bare winter trees are a different kind of beauty.

The ‘80s are on my mind a lot these days.  When I wrote about what feels like an ‘80s redux in current times, the New York Times hadn’t yet published its special magazine section, Losing Earth, focused on the decade 1979-1989 when the body of research re: global warming seemed to be taken seriously enough to bring (almost) international consensus for a strategy to reduce carbon emissions.  On top of that we have the urgent UN report.

I need to believe all is not lost.

On the personal side: I got married in 1984 and gave birth to my daughter in 1986. In the year between the most life-affirming moments imaginable came the death of my husband’s good friend and business partner, an early casualty of AIDS.  Maybe ‘imaginable’ is the operative word here. The heart of the novel I published earlier this year is a girl’s coming of age during the ‘80s. As the story began to percolate, I had a backdrop of extreme personal joy coupled with extreme sadness.

Funny how a writer’s mind works.

Sometimes you know something even before you know you know it. If I didn’t yet have confirmation of that decade as a profound time of innocence lost, the proof would come.  We were on the edge of the technology that would take over our lives.  That was then, this is now. The power to manipulate information is frighteningly easy. Take a quote out of context, give only half the statement.

I know there is no turning back but I need to believe that life-affirming instincts hold sway over the cynicism and lies thrown at us left and right.

I want to believe that a time will come when I’ll get past my resistance to using a verb that bears the name of the man in the Oval Office.

Maybe—just maybe—if enough thinking people take the time to look past the smokescreen of misinformation, there’s still hope that we can keep our planet from burning up and our democracy from self-destructing.  My daughter is much less hopeful.  She reminds me that I can’t even get Republican cousins to listen to reason and see the bigger picture beyond immediate, personal self-interest.  When families can’t talk to each other, what does that say about the country at large?

Entertainment is as much an escape as it is a reflection of our culture. Is it any wonder that Wonder Woman and Black Panther broke box office records? Now we have the spectacle of King Kong on Broadway.

I can’t say I have any intention to see the show, but I can say that King Kong himself is a fixture in my imagination. In the days before Netflix and streaming and DVDs, there was “Million Dollar Movie,” a weeklong chance to watch a film you loved over and over and over again. King Kong and Mighty Joe Young stand out as the two movies I watched more than any other. How could I, as a young girl, help but be fascinated by a larger-than life gorilla who may have struck fear in the hearts of natives on Skull Island but clearly had a soft spot for Fay Wray? How could I, as a young girl, help but be touched by a young (and then grown) Terry Moore calming her pet ape with a beautiful piece of music?

The animation in the 1933 King Kong may seem quaint by today’s standards but it was groundbreaking at the time. The 1976 remake with Jessica Lange would give King Kong’s eyes a very human dimension but both versions leave indelible images of a woman held captive in the palm of what would seem to be a frightening beast. This is the moment where metaphor plays its hand. The 2005 remake with Naomi Watts shows a woman still captive but doing her best to communicate with her captor. Less screaming, more compassion.

The racism and sexism inherent in King Kong may have been lost on me as a young girl probably because it seemed more a story about trying to tame the untameable.  Of the eleven movies to date that call up that mighty gorilla, I’ve seen only the original and the two that follow its story line.  Whatever Broadway promises with its 20-foot tall, 2,000-pound puppet would seem to speak more to special effects than story. Call me a purist, but there is no way that the movie’s cinematic pinnacle—a primate seeing some means of survival in scaling the tallest building in New York City—can be adequately conveyed in a stage set. At the same time, isn’t it uncanny that King Kong’s latest incarnation comes at a time when survival and sexism are at a cultural zenith?