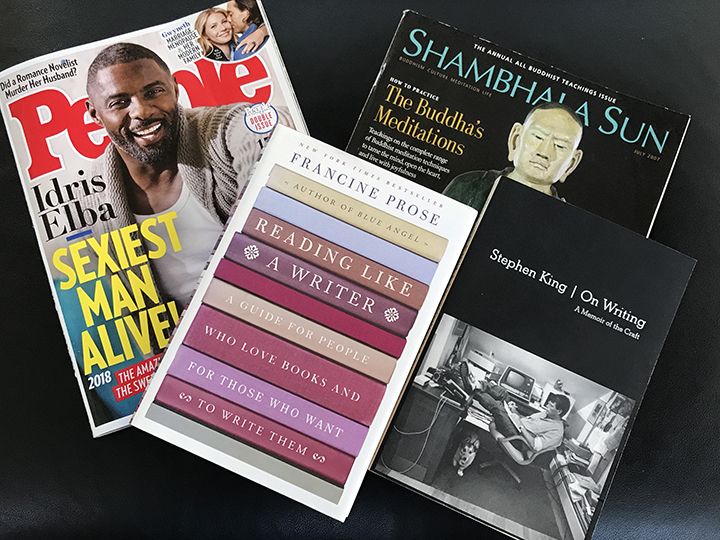 Last week found me a little more adventurous than usual on Instagram. I posted a photo, with a  caption, a bit tongue-in-cheek: ‘Cozying up for some inspirational reading. What will I choose first?”

If the purpose of social media, in its varied forms, is to let people know what you’re up to, get a conversation going, well, this photo says it all loudly and clearly.

Feed the mind. Feed the spirit.

A day or so later I posted a selfie, the me (almost nobody) knows. I almost never post photos of myself, except within some cultural context: a museum, a reading, a rock concert. But, as I said, I was in a playful mood. Days later I was still getting responses.

Buddhist wisdom tells us intention is everything. What does it suggest when many of the less whimsical photos and posts I share—snapshots I deem artsy, New Yorker cartoons, essays on writers or books, news stories (sometimes political, more often not)—don’t necessarily spark the kind of conversation social media was set up to foster?

Is it the nature of a beast more eager to feast on the up close and personal, moments as in-the-moment as it gets, than take the time to chew on fodder not so readily digested in the blink of an eye?

Chanukah, the festival of lights in a season embodied by darkness, has come and gone.  From a standpoint of Staying Healthy with the Seasons, there’s something anomalous about all the frenzied gift-giving and partying that goes hand in hand with what Madison Avenue pumped up as a time to be merry.  Introspection—going inside, literally and figuratively—is the real call of winter. There’s a reason bears hibernate.

Right now I’m introspecting (yes, that’s a word) about Idris Elba. Retro as the whole notion of ‘sexiest man alive’ may be in a #MeToo world, I can’t help but smile at his smile on the cover of People. It seems he was ‘robbed’ of that title in 2017, when it went to Blake Shelton (a travesty, indeed). But here we are, a year later, where my wait at the supermarket checkout found me deliberating whether to buy the one remaining copy on the magazine rack. A cover line—Did a Romance Novelist Murder Her Husband?—sealed the deal.  Oh, I’m in store for some meaty reading.

Glibness aside, I marvel at how the mind works. Months after hearing Terrance Hayes read from his work, his poetry continues to cast a spell. His latest collection, American Sonnets for my Past and Future Assassin is astonishing for its vision, power, and timeliness.

In the midst of all this introspecting comes a riveting James Baldwin essay from the New Yorker archives, “Letter from a Region in My Mind,” that only adds to the despairing chill. Please don’t remind me we’ve been here before. Please let me believe that some of the progress we’ve made counts for something that allows me to be lifted by a feel-good holiday movie, Green Book and a subtly powerful play by Conor McPherson, Girl from the North Country. Set in Depression-era Duluth, Minnesota, and built on the songs of Bob Dylan, it’s nothing short of a reminder of Dylan’s brilliant way with music and words.

Inspiration takes many forms, although a more apt description of what happens when a piece of music or a movie or a book captivates me is a sense of being infused with some aspect of it.

Great fiction is often my best reboot. Then there’s meditation and the simple act of taking a walk. Crisp winter mornings, with the reflection of clouds in a lake, are a particular pleasure.

And even if I may not, in this lifetime, experience the dissolution of ego that brings with it the sense of oneness with the universe,  I get glimpses of what might be that peaceful prelude to heightened consciousness via meditation.

Or, again, via music, for the way it can’t help but infuse itself into the body.  In Michael Pollan’s thoroughly researched, personally validated examination of the new science of psychedelics and why they may be a powerful tool in psychotherapy, not to mention our understanding of consciousness, he makes note of an experiment in which  “pieces of music that held no personal relevance for volunteers were played for them while on LSD. Under the influence of the psychedelic, however, volunteers attributed marked and lasting personal meaning to the same songs.”

He also has this to say:

“If you want to understand what an expanded consciousness looks like, all you have to do is have tea with a four-year-old.”

2 thoughts on “Feed the mind. Feed the spirit.”