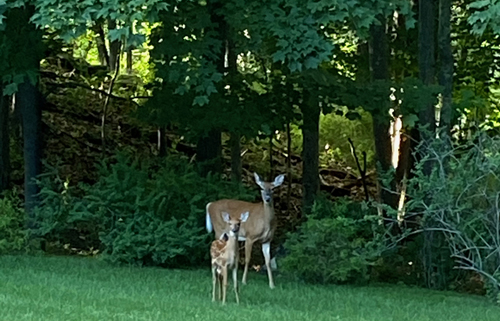 When my daughter was young she had a favorite dress, white eyelet and lace, a special occasion dress that needed no special occasion for her to insist on wearing it.  A pretty purple plaid, more suited to everyday school activities, would take its place, followed by a fancy for polka dots to satisfy her emerging sense of style.

Accommodating mother that I am (who happens to be handy with a sewing machine),  one Halloween would find her in a polka dot dress modeled from a favorite book from the Bailey School Kids series, Vampires Don’t Wear Polka Dots. As a young woman, she would be drawn to the playful, signature polka dot designs of Betsey Johnson.

This week has me thinking about polka dots mostly in their association with a favorite female cartoon character of my daughter’s.

Minnie Mouse, it seems, is slipping out of her signature red dress and into a pantsuit designed by Stella McCartney to coincide with the 30th anniversary of Disneyland Paris and in celebration of Women’s History Month.

My daughter was six when we took a family trip to Disney World.  Walking through a Magic Kingdom has its thrills and silly moments, not to mention one too many shops with that oh-so-coveted Minnie Mouse beckoning, come and get me. Right here. Right now.

Is there something to be learned from gratification delayed?  Can a picture of a child, in all her self-satisfaction after all that whining and waiting, be worth a thousand pouts?

Iconic cartoon characters have a hold on our collective imagination. They’re reflections of the era in which they came into being. As the art of animation developed to a more sophisticated level, characters could be more (or deliberately less) savvy. Changing times have raised the bar for Disney movies to give its animated female figures a bit more grit and spunk. I loved watching Frozen (even without my daughter sitting on the couch next to me).

By the same token, all the fuss over Minnie’s new look has me wondering: Who is this really for?  And what’s the point?

At which point I picture my daughter in a Stella McCartney blue polka dot tuxedo. All grown up.

Speaking of all grown up—

You would have to be living under a rock not to at least get wind of the Sesame Street clip in which Elmo lashes out at his friend Zoe for insisting that Rocco (her pet rock) be given the oatmeal raisin cookie Elmo covets.

First aired in 2004, it reached a feverish online viral load last week. The age-old Sesame Street message of sharing is lost, replaced by frustration and a less-than-innocent logic that has gone to Elmo’s head.

“How is Rocco going to eat that cookie, Zoe? Tell Elmo. Rocco doesn’t even have a mouth. Rocco’s just a rock! Rocco’s not alive!”

If I laughed when I first saw the video on You Tube, humor quickly gave way to pity for my favorite Sesame Street character. Poor Elmo, who just wants a cookie that it makes no sense for him not to have.

A teaching moment, some say, in the truest tradition of Sesame Street?

A timely moment, others say, that couldn’t help but catch fire in the way it reflects pandemic exasperation over the smallest things?

Or maybe it’s as simple as this: Elmo is a little too grown up now to just chalk it up, do the gracious thing, let Rocco have the cookie.

Deer are ubiquitous in the exurban town where I live.  They stroll through backyards.  They eat what we’re hoping they won’t.  They stare right at you before they wonder if they should feel threatened and then dart off. They’re rumored to be the cause of Lyme Disease.

And yet, every fawn is Bambi.

Anytime I see a fawn with no mother nearby, I worry.

Anytime I think back to watching the animated Disney movie with my daughter, the horror of its beginning scenes fills me with an innocence-to-experience despair.

Bambi alone in the snow, the sound of a gunshot, the only evidence of his mother her words: Run Bambi run!

Bambi with his friends in the forest, engulfed in fire.  Run Bambi run!

It appears, according to a recent New Yorker article, that the novel from which Disney adapted Bambi was even bleaker. Published in 1922 by Felix Salten, an Austro-Hungarian writer, Bambi: A LIfe in the Woods has more savagery in it. It’s a survival story, after all, possibly a parable of the human condition and our relationship to the natural world. The Nazis apparently banned it as a parable about the plight of the Jews.

Shocking as this backstory is, more interesting to me is learning that the movie Is among the most popular in the history of the industry. “In the four decades following its release, it earned forty-seven million dollars—more than ten times the haul of Casablanca, which came out the same year.”

With so much real news/fake news, information/disinformation, entertainment of both the enriching and inane variety bombarding us day in and day out, we can focus on and absorb only so much. We tune in. We tune out.

All of which helps explain a nagging nostalgia that has me wishing on a star to be frozen in  time just long enough to cuddle with my daughter on the couch watching Bambi bond with a rabbit and skunk as he negotiates his coming of age.    Or better yet, tuning in to Sesame Street, Tickle Me Elmo and Minnie Mouse nestled in her lap.  She would giggle at Muppet antics, no clue to the humor lost on her in segments like “Miami Mice” and “Born to Add.” That is part of the brilliance of the show, bring on the movie stars and rock stars, make sure mommy and daddy don’t miss a beat.

Who could know I’d one day witness the gaslighting of Elmo, only to find myself applauding him for simply stating the obvious.