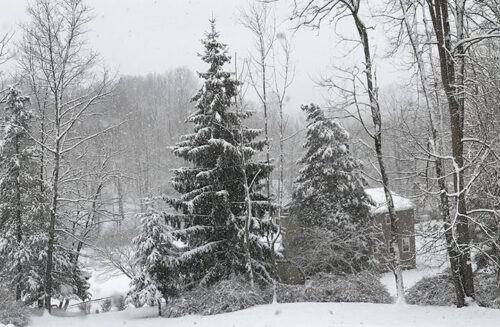 April 2, 2018: it’s snowing outside, at least four inches’ accumulation by 9 a.m., no April Fool’s trick here. Yesterday a woodpecker caught me by surprise, a beautiful bird despite the damage it can do. Winter storms had blown away the strips of foil pinned to the column of wood that rat-tat-tatting bird has a taste for and which actually deter it, so I went looking for them in the yard—only to discover more miner bees than last year making nests in the soil. Otherwise known as ground nesting bees, you see them hovering near the little mounds of dirt that mark the entrances to their underground nests (no hives) and several females may nest in the same vicinity. They’re docile and they do lots of good pollinating and they don’t stay around for too long. But I can be forgiven for fearing an imaginary sting.

Today it’s the solitary crow in the snow demanding my attention. 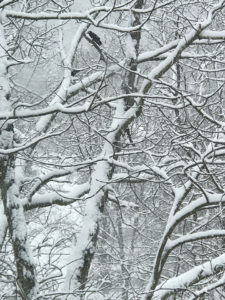 A Yahrtzeit candle burns on my window sill. Lit at sundown last night, it’s a memorial candle marking my mother’s death according to the Jewish calendar, 17 Nissan, the second day of Passover.  A gorgeous full moon, a blue one this year, lit up the sky during Saturday night’s seder.

Well maybe not a full-scale seder since I opted to make it simpler this year.  I try, really I do, to keep the spirit of the Jewish holidays, not to mention my mother, alive, and I’m grateful for the friends and family who gather around the table each year. 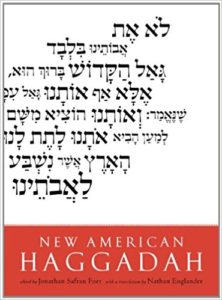 Even without a traditional seder, I need to mark what brings us together by reading from some Haggadah recalling the wonderful story of freedom from slavery in all its Cecil B. DeMille splendor.  This year’s choice was the New American Haggadah, translated by Nathan Englander and edited by Jonathan Safran Foer. It was a gift from friends who come every year. They know I’m a sucker for a beautiful book with a literary duo at the helm.  Here are some random passages that we read:

We live in a broken world . . . Exile—another name for brokenness—is not just the current condition of the Jewish people, according to the Kabbalah, it is the fundamental condition of the universe and of God.

Kafka once wrote in his journal: “You can hold yourself back from the sufferings of the world. That is something you are free to do and it accords with your nature. But perhaps this very holding back is the one suffering you could avoid.”

Passover is a journey, and like most journeys, it is taking much longer than it ought to take, no matter how many times we stop and ask for directions. 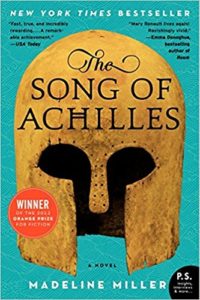 By no small coincidence, the fiction I’m caught up in right now is Madeline Miller’s The Song of Achilles. The novel casts a spell mostly in its reimagining of the heroes at the heart of the Trojan War.   There are slaves here, too, women taken in raids by the Greeks as a prelude to the war and it’s hard not to be taken with the humanity of Achilles and Patroclus in doing what they can for the few in their charge. Then there’s the war itself, as epic and classic as it gets, with its reminder that there’s no escaping the appetites of men for glory and greed, not to mention revenge. We get our archetypes from myths. We get some understanding of human foibles and the way gods have played with them. There may never again be a war of a thousand ships waged in the name of a beautiful woman. But there will, alas, always be wars, more often than not in the name of nameless things.