I love Groundhog Day.  It’s a silly tradition but it manages to work its charm. I always wake up on February 2nd filled with anticipation about all the implications of a shadow. (Did that funny-looking creature with an equally odd name see his shadow? Did he not see it?) The shift to more daylight, so incremental since the winter solstice, suddenly feels dramatic. Winter is on its way out; spring is on its way in.

I know Punxsutawney Phil doesn’t always get it right, and I don’t care. I may be less forgiving with my local know-before-you-go meteorologist whose forecast promised clear skies and left me running for cover in a downpour—just the thing that got Bill Murray’s character in trouble in a cult classic movie that celebrates its 25th anniversary this year. What better way to mark the story of a weatherman caught in a comedic time warp with existential implications than for Starz Encore Classic to have round-the-clock showings today? 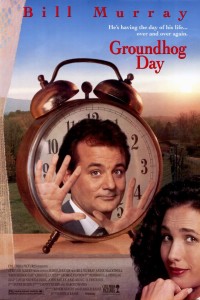 Putting aside the clever spin ‘Groundhog Day’ (the movie) brought to this very day, for me it’s more about continuity, and the whys and wherefores of legends.

One legend links Groundhog Day to Candelmas, an ancient Christian tradition marking the midpoint between winter and spring during which candles were blessed by clergy and handed out. A sunny, clear day signaled (superstitiously speaking) a long, rough winter; a cloudy sky meant warm weather was on its way.  The legend of Punxsutawney Phil as we know him, seems to derive more directly from German lore in which a hedgehog seeing his shadow on a sunny February 2nd was a sign of a six more weeks of winter.  Early German settlers in Pennsylvania made the groundhog a stand-in for the hedgehog.

This February brings more than a spring alert. As many of you may already know, that novel you got a glimpse of when I asked for your support in a Kindle Scout campaign (which did rev me up even if it felt a little like ‘American Idol’ for book lovers), is coming, April 10th to be exact.  Publishing is a quirky business that demands a great deal of tenacity and faith from a writer.  We write, we revise, we chuck what we think doesn’t quite cut it or we tuck it into a folder if it has some vestige of possibility.  We crave validation, we cry at disappointments that make us question why we do the very thing we could not live without doing.

At the heart of my novel is a young girl’s special relationship with a doting gay uncle and her coming of age during the ‘80s, which were nothing if not a threshold decade. Think about it—AIDS. Ronald Reagan. Glamour and greed.  My fictional mind took me to an era marked by innocence lost. And my metaphoric soul took me to a month on the cusp of spring, the shortest month of the year.

Now it’s here, the novel and the month for which Just Like February gets its name. Leap Year plays its part in reminding us there’s something more at play in how we measure our days. And, yes, the groundhog makes a brief appearance.