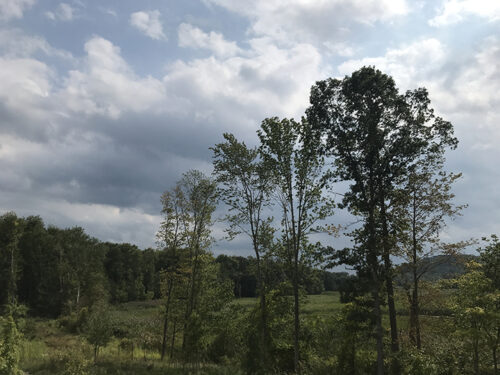 Labor Day has come and gone, and with it the season most riddled with paradox.  If those long light-filled days of summer are so lazy hazy, why do they seem to slip away in a flash?  Plausible theories may explain why time seems to speed up as we age. But even as a child, the freedom from routine that summer offered always seemed to end too soon.

My last post began the summer that I would give myself a hiatus from all things writing-related. No blog posts. No revisiting drafts of stories or starting new ones. A break that surprised me with an unfamiliar liberation. I meditated more, hoping that concentrated practice would let that monkey mind know it’s okay—actually it’s good—to let go of thoughts, leave the brain to make space for something far more settling than words.

The pull of social media somehow diminished.  Was this a sign? I wondered. Some indication that, even in a time when the need for connection and community seems more urgent than ever, a little retreat goes a long way toward restoring a sense of balance, not to mention priorities?

Toni Morrison died this summer, which had me hankering to revisit her first novel, The Bluest Eye. I would have been 20-something when I read it. I still have the original paperback copy. Its impact on me was profound.

Decades later, a full-fledged fan and a writer myself, I see it in a much more informed light. I relish the hindsight glimpse into the archetypes and themes that would get richer and more mythologically complex as her body of work grew.

Decades later, months from turning 70, a more conscious vulnerability has me in its grip. The qualifier matters. Feeling vulnerable is not a new sensation but something about the time of life and the times in which we live make it all the more visceral. The world into which I brought my daughter (1986) was hardly the best of times but you can’t be a weed-smoking child of the ‘60s without believing in your power to change the world for the better.  The dark cloud hovering over what feels like the worst of times gives me pause, at least long enough to remember that everything changes. Doesn’t it?

Open-ended days are prime for reflection, not to mention restlessness. Years of feeling so driven do not give way easily to a less urgent rhythm.  I would use that energy to do a clean sweep of folders sitting in file cabinets. Even knowing that clearing space would open me to what might come next, I worried about the effect of seeing all the efforts and projects behind me, hearing voices from the past in a dull ‘this-is-your-life’ chant.

Reminders of disappointment surfaced, along with an affirmation of deep-rooted tenacity. I smiled when I came across this gem –

Many of the school-based workshops I conducted were a collaboration with visual artists. This project was a mix of learning the art of hand-made paper, writing poems, and putting it all together.

Then I saw these words on a prep sheet I used for another writing workshop.

I look out at an autumn landscape, leaves fading, even beginning to turn. There’s a metaphor here.

It’s been said that a writer’s work isn’t finished until it’s read. Even if you write in a journal religiously, there’s an assumption that you’ll go back, take a peek at your thoughts/observations/feelings in a given time and place.

Some say it takes courage to write.  For me, writing is an assumption. I love the puzzle of it—images and thoughts into words, words into sentences, sentences into paragraphs that, when I’m most in the flow of it, become stories and essays that hopefully resonate.

More than one person has said it took courage for me to learn to swim at 66. For me it was more a question of finally doing something I’d been wanting to do for some time. Courage? Maybe. Or better yet, learning what buoyancy truly encompasses.

And I turn that metaphor on its head.

I may not like the clunkiness of the word.  But I’m still at it, going on ten years since my first post, inspired by other writer/friends who had joined the web(log) bandwagon. Many have quit the habit, new writers find their way. But there are very few to beat C. M. Mayo, an inspiring and gifted writer indeed, for continual reinvention, and with it, the reminder that a blog is what you make of it.  I’ve come to think of mine as a notebook of sorts, public in the dialogue it makes possible between a writer and her readers.