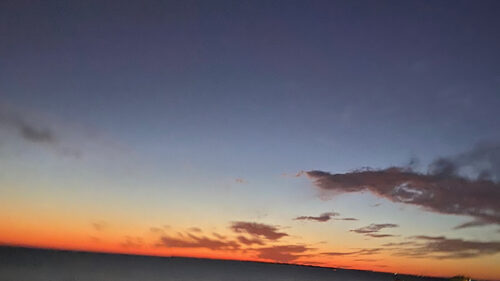 I don’t do well with mice . . . (unless they’re the animated Disney variety making a dress for Cinderella or of the Mickey/Minnie ilk). They keep us on our toes in scoping out their secret hiding places, unnerve us with the uncertainty of their moves.

The other night, the sight of something slipping under a closet door caught my eye.  A mouse? A large insect? Maybe just a shadow?

I called out to my husband to investigate.  A mouse indeed, scurrying along the closet floor, looking for refuge somewhere in a jumble of shopping totes.

Eek!  I scrambled back from the door.

In my husband’s attempt to find and contain the little critter, he handed me (hopefully mice-less) totes one by one.

The mouse jumped, seemed to disappear. I imagined putting on a jacket or coat, squeamishly surprised by a mouse in a pocket.

We had to find it, send it on its way out of the house.  My husband placed a cardboard barrier across the closet entrance, trapped the mouse under a cup.

Out! Out! Damned mouse!

Out of my house.

I work hard at not being (too) reactive to the small stuff (a mouse more likely afraid of me than I am of the havoc it wreaks on my psyche) and the big stuff (a virus that has so many acting as if World War Z is upon us).

In anxiety-ridden times, very little is too small or too big to push our buttons and a pandemic is bound to give rise to panic. I worry more about the panic COVID-19 has triggered than the real odds of being hit with a more than mild case or, far worse, death from infection. But that didn’t stop me from negotiating with my local CVS for an extra packet of antiseptic wipes to send to my daughter in southern California.

In anxiety-ridden times, fear of the unknown becomes magnified. If it’s true that the past informs the present, we should look to the reassurance of our worst nightmares rarely panning out.

If it’s true that the future is riddled with uncertainty,  we should steady ourselves with what living in the present tells us again and again: being receptive, not reactive, to whatever the moment presents allows space for seeing things as they are, not as we project them to be.

A stop at Target had me alarmed (reactive) at the sight of lines at the checkout counters, shopping carts rolling over with rolls of paper towels and toilet tissue and who knows what.  I watched, let my brain switch into receptive, here-in-the-moment mode.

I drove away, found paper towels and toilet paper and the groceries I actually needed for dinner at a much less frenetic supermarket.

Anxiety begets anxiety.  That vile—yes, vile—thing in the White House has so many of us feeling despondent, not to mention angry.  Remember what it feels like to be a kid with no parents in charge during an emergency?  Toilet paper only gets you so far. Feeling the urgent need to stock up on it reeks with metaphor: the shit is really hitting the fan.

No small irony that the metaphor of toilet paper surfaces in Here I Am, a poignant, profound, beautifully written novel by Jonathan Safran Foer published in 2016.  As Isaac, the patriarch of the family, readies himself to take up residence in a home for the elderly, he asks the rabbi to pick up toilet paper at Safeway, where it was on sale. The rabbi tries to reassure him that he wouldn’t need to buy it anymore.

“But that price. . . . “ reflects Isaac, who then goes on to say: “There are two things that everybody needs.  The first is to feel that he is adding to the world.  The second is toilet paper.”

Later, ‘adagio’ surfaced from a more receptive state of mind. Bingo!  I knew all along it was the undercurrent of  ‘Platoon.’ And now I recall its name: Adagio for Strings, Samuel Barber.

I played it while I did yoga. It’s the kind of music that demands you slow down. Listen to the rise and fall of every phrase. Pay attention. Cry. Accept the goosebumps it elicits.

In the room that doubles as my work space and yoga studio is a photo of Leonard Cohen, a gift from a gifted photographer/friend, Abe Frajndlich.  It’s a young LC, holding a cigarette, looking directly at me no matter which way I turn.

It’s no secret that I’m a longtime fan, moved by his poetry, music, humility, sense of humor, spirituality, even the darkness that first drew him to me in all its appeal, sensual and otherwise.

In my secret life I have a spiky punk hairdo and I’m channeling Patti Smith.

I’m riding a wave on a surfboard.

I’m light as a feather when I do yoga poses.

I’m not thrown off course (too much) when something catches me by surprise.

I’m not worried that my daughter worries that I’m not taking COVID-19 seriously enough.

There’s only true normal, not the nouveau strain that masks the anxiety its intent is to ease.

I’m not running from a mouse.