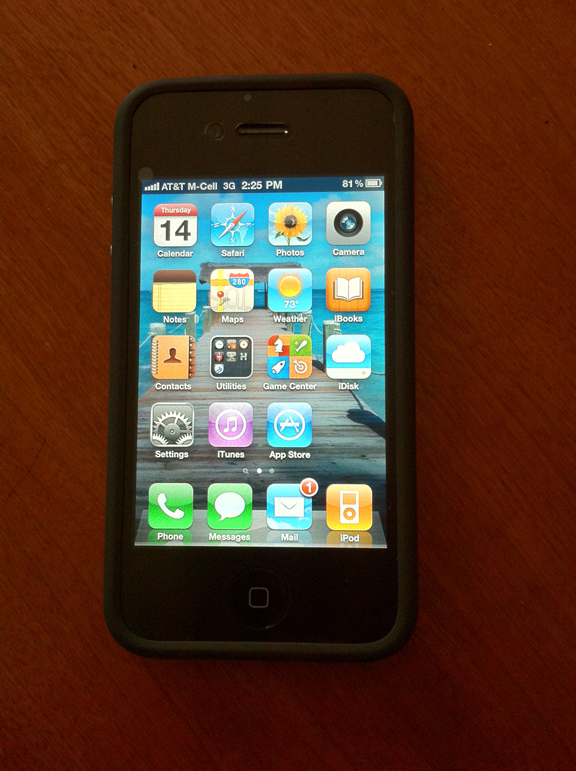 My husband does not own a cell phone. This is no Luddite, holier-than-thou holdout. He doesn’t need one, he insists, case closed.  He has a two-line phone for his business and only recently made a big technological leap, from an old-fashioned answering machine (the tape was beginning to crackle) to the state-of-the-art answering services provided by Verizon.

Anyone wants to reach him when he’s out of the office doing errands, tough luck.  I forget something on the list of grocery items I gave him, too bad. He has nothing kind to say about drivers on their cell phones, except that they’re accidents waiting to happen.  The proof is in the telling, a woman who shot past him in her SUV, into the left-turn lane at an intersection, cell phone glued to her ear, a near-miss with an oncoming car. He bristles if a cell phone rings in a restaurant (I don’t like it myself). And yet . . .

My daughter and I switched to AT&T so she could get her first iPhone a few years ago, now we both have them. I couldn’t help myself. It’s that encroaching technology thing. Or do I mean enticing? My first cell phone was basic, no frills, family plans making two phones (almost) more economical than a single-user plan, especially with my daughter going off to college;  next came the picture phone (like, why not, even if I almost never used it?).  Texting took me some time to get a handle on. Then there was the simple question – do I really want to be that available 24/7? – which turned itself into a twisted logic, Mad Men doing what they do best: you need a cell phone, I’m told. Just in case.

Need? My husband smirks. We did just fine, maybe even better, before cell phones, thank you very much. He thinks my daughter calls too much. Only when she needs me, I explain. (Let me say it again, need.) It makes him edgy, the beep of a text message while we’re watching a TV show or movie.  When do we let go?

All of which places me smack in the middle of a modern-day love triangle. I love my tech-wary husband, he’s the one I live with. I love my tech-savvy daughter, so far and still so near.

My husband believes that cell phones will be the downfall of civilization. He is convinced that dependency on cell phones is going to backfire one day, turn us into a nation of nervous wrecks. Watching him use mine, when we’re in the car together and a friend of his (or our daughter) really really really needs (ha!) to talk to him, is always good for a laugh. He speaks loudly into it, as if it’s more toy than phone.

My daughter e-mails me a list of must-have apps for my iPhone, among them At Bat Lite (for dad, she says).

My husband says he can just as easily check baseball stats on his computer, no need to have them on-the-go.

My daughter e-mails me a link re: updates in ebook publishing. She consults with me via text messages re:  TV shows I should watch, fitness classes she is considering, dogs she thinks I should adopt, and calls me when the stresses of health maintenance, car maintenance, moving to a new apartment, and generally trying to make it on her own get a little overwhelming.  Also for some recipe and shopping advice.

We’re too dependent on gadgets, says my husband. Forget the GPS. Look to the sun for direction.