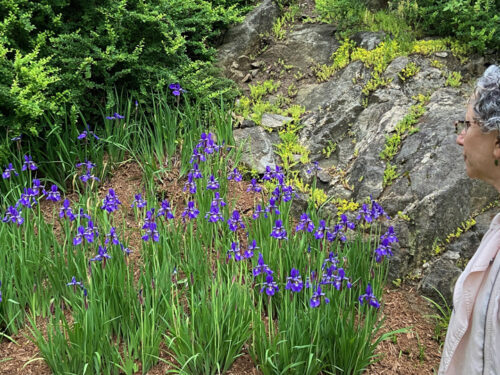 The traditional beginning of summer, this one like no other we’ve experienced, brings a little easing of pandemic restrictions, if not the anxiety that we’re moving too quickly too soon. People are antsy, edgy, ready to go to the beach or the park, not to mention get back to work.

A few hours with friends, late afternoon, three couples sitting far enough apart to feel safe but close enough for easy conversation, is refreshing. We bring our own picnic dinners, no sharing of food. Does it feel weird not to be dipping into a big bowl of chips and guacamole, cook up a batch of burgers and hot dogs? Yes. At the same time, it’s not Zoom, and that’s a very welcome thing,

America is broken, and no matter which side of the political divide you’re on, it’s hard for most caring, thinking people not to be moved by the despair, the frustration, the deaths. Then comes Memorial Day. You can almost smell the salt air, feel the sand between your toes. Try to remember why this holiday even exists.

Try to believe that something approaching normalcy is possible.

Last week had me finally trashing a box of cassettes I’ll never play again. But those toys from another time and figurines–Ariel, Cinderella, the Tin Man, the Lion, the Scarecrow, Dorothy–collected when my daughter was young and later on used in my elementary school writing workshops, well somehow they don’t want to leave. Laying claim to my Marie Condo ruthlessness gets me only so far.

They don’t want to leave–pay attention to how I phrased that. Yes, they have a life of their own. They want a Memorial Day that means something. They want me to play a simple game, something tactile, not digital.

I curl my hand into a fist—

Open it out flat—

Make a V with my index and middle fingers—

Barely a week since Memorial Day and American is not just broken, it’s burning. If echoes of the ’80s reverberated when the current occupant of the Oval Office took power, his reign of horror is evidence that the ’60s (not the mention the Civil War) never really ended.

Sorry I haven’t called today. I just don’t have the words.

Who does have the words? I’m tempted to write back. Instead I let it be, just tell her I understand. Then I open a link she sent, an op-ed piece in the LA Times by Kareem Abdul-Jabbar. It’s eloquent, heartfelt, poetic:

Racism in America is like dust in the air. It seems invisible — even if you’re choking on it — until you let the sun in. Then you see it’s everywhere.

My toenails have no polish, my hair is, thankfully, all grown out grey, in need of a trim but I can easily fudge it. I’ve learned how to give my husband a buzz cut. After dinner we take a walk outside. I marvel at what nature, with a little coaxing and pollination and pruning, takes care of if you just let her be. He loves seeing bees moving from flower to flower. Not everything planted survives.

He used to buy me irises, my favorite flower. Now they bloom, like clockwork, every May.

Is there some equivalence between the reassurance I take from seasonal renewal and seeing familiar brands of paper goods–Kleenex, Scott, Seventh Generation–return to supermarket shelves? Will the unfamiliar (at least to me) ones–TreeFree, Envision–disappear?

In my car, listening to a Sirius XM station named for Frank Sinatra. His daughter Nancy is hosting. She ruminates on her father reminding us what a great country we live in. We’ve been through hard times before, he would say. We got through them, we’ll get through them again. She wonders what he’d say now, then plays New York New York.

I’m a Sinatra fan, and I believe in the power of music to save us. But right now my money would not be on the chairman of the board.