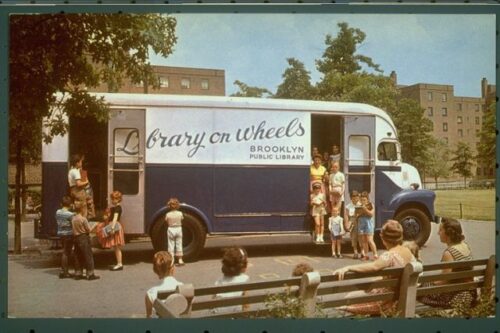 The first public library I ever walked into was on wheels.

There was an elementary school, more than one synagogue and church, but no nearby library in the Brooklyn neighborhood of my early childhood years.

Situated on the edge of East Flatbush and Canarsie, that maze of 20 six-story buildings known as the Glenwood Houses would be something of an anchor for a neighborhood on the cusp of change. It was the 1950s and affordable, income-based public housing would be a big draw for middle-class families like mine. I was not yet seven, about to enter second grade, when we moved there. By the time I was in third grade, that thing we think of as independent reading began to kick in. By fourth grade it was something of a hunger.

My idea of manna was the Bookmobile making its weekly visit, etched in my memory as Wednesday.

The back door of the blue and white vehicle emblazoned with a Library on Wheels logo was for returning books. I walked up the steps, deposited the books I’d read. There was no lingering in this 20-by-8-foot dimly lit space, but ten minutes—just enough time to find something recommended or see what jumped out at me—could seem like a blissful eternity before exiting via the front end, filled with the anticipation of where the books I’d chosen would take me.

Every time felt like the first time—the wonder that so many books could exist about so many things, the growing awareness that stories could take me far beyond my circumscribed world. From a cultural standpoint, music and TV played a big part in my family life, books not so much. Newspapers—the Daily News, New York Post, National Enquirer—kept my parents engaged, though my father did read an occasional book, even bought me one, a collection of Hans Christian Anderson fairy tales that got me through my bout with measles.

Time has a way of shaping memories. On the day the Bookmobile came around (maybe Wednesday, maybe not), I see myself walking alone from the street on which I lived to the other end of the housing project, where it would be parked. Maybe I was alone, more likely not. But that sense of aloneness strikes at the chord of a young girl’s secret pleasure and the way her life is turned around by a library on wheels that first brought her Ramona and Pippi Longstocking, fictional girls who spoke their minds, did brave, sometimes nonsensical, things.

It doesn’t take much to imagine my thrill when construction began on a permanent library. More books. More choices. I could take out ten at a time for summer reading, sit on my favorite bench, in the shade of a tree overlooking a patch of grass. If books are the embodiment of shared stories, libraries elevate them to a collective consciousness.  Someone else has held the book I’m now reading. I relished the slight crackle of the translucent, protective covers. The smell—not so much musty as reminiscent of aged wood—was an invitation: come inside, see what I have for you.

My first job would be at the new library.  I was about to turn 16, my last year in high school. I would shelve books, check them in and out, do managerial tasks in the back office.  The library manager would give me a lifelong lesson in learning to type, a skill not necessarily in the course listing for students on track for an academic diploma.

There’s a national day for everything. As it happens, this is National Library Week and Wednesday is National Bookmobile Day. Google found me a 1950s photo of my very own Glenwood Houses Library on Wheels, hashtag-ready for its Instagram/Facebook/Twitter closeup celebrating those oversize vehicles that make books available in hard-to-reach places of our country, not to mention the world.

Wednesday, April 10, also happens to be the date my novel, Just Like February, was published last year. An anniversary is a good time for a giveaway. Leave a comment with your thoughts re: the special place libraries have had in your life and you’ll be eligible to receive a signed copy.