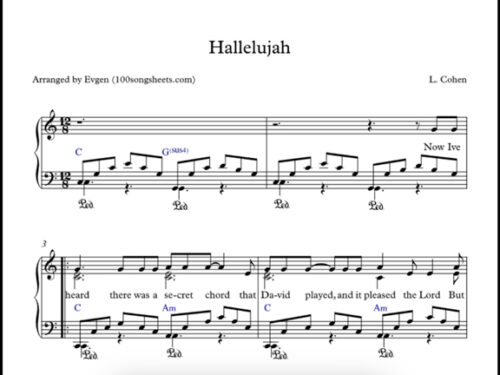 “Is ‘Hallelujah’ a Christmas song?” asks a friend. He has a doubtful look on his face. He heard the song as part of a Christmas compilation. Leonard Cohen aficionado that he knows I am, he figures I would have an answer.

As a piece of music, ‘Hallelujah’ is a story all its own. The Holy or the Broken, Alan Light’s illuminating book about the song’s origin and its growing popularity over the years, unravels how it found its rarified place in the canon of pop music.  And the recent documentary—Hallelujah: Leonard Cohen, A Journey, A Song—brings even more context to the singer/songwriter and the work for which he became most well known.

In chronicling what music luminaries have to say about one of the most covered songs in music history, Light writes about a visit k.d. lang (who first covered “Hallellujah” on her 2004 album, Hymns of the 49th Parallel) paid to her eighty-eight-year-old mother who tells her how much she and her friends love that song.  She asked her mother if they’d paid attention to the lyrics, which was exactly the point I made to my friend.

Would a Christmas song take you to a sexual moment? —

There was a time when you let me know
what’s really going on below
but now you never show it to me, do ya?
Remember when I moved in you
the holy dove was moving too
and every breath we drew was Hallelujah!

The response lang’s mother gives pretty much sums up why a song that encompasses love and spirit, biblical lore and wit in a way that only Leonard Cohen can do—all to a backdrop of a simple melody with its see-saw phrasing—the minor fall/the major lift—and lingering one-word refrain.  It’s not the lyrics they listen to, said lang’s mother. It’s all about a word, a sacred expression of praise to God, elemental to both Jewish and Christian liturgy, and its echoes throughout a song that makes me smile as many times as it brings me to tears.

There’s no escaping the power of music to drive our spirits and place us in time, but come December I can’t help feeling manipulated when any radio station I tune in to pulls me into a seasonal music vortex I can only escape by turning off the radio. Does it bug me? Indeed it does.  Is it my Jewishness that resists the ubiquitous nature off Christmas songs, religious and otherwise? Maybe, though there are years when the tug of nostalgia with its built-in sentimentality does get to me. I may not exactly be dreaming of a white Christmas  (what with the fierceness of polar vortexes ) but I do wish I could will away the nightmare of holiday travel that keeps my daughter from visits home.

Then again, there are other much more sane times to travel.

It’s the ultimate conundrum:  I may hate the ways in which the gods of commerce turn winter wonderlands into little more than a meme, but that collective feeling of what it means to be in a place called home with family and friends has its contagious (poor word choice?) moments.

In the years I lived in the city, I needed to be in the thick of it and marvel at it all—the magical, storied windows of Saks Fifth Avenue, the imposing Christmas tree and angels lighting up Rockefeller Center, the skaters gliding around the rink.

My foray into the city a few weeks ago was a reminder of all that’s changed—in me as well as the holiday glitter and gloss—since I moved to my exurban bubble.  Even before the pandemic kept me from venturing in this time of year, the thrill was a bit gone. Streets cordoned off for security purposes, more tourists than ever muscling their way along Fifth Avenue make for crowds too close for comfort.

Instead of being enchanted by the Saks windows, I had to settle for this bit of kitsch.

Which brings me back to where I started with questions of holiday music and what it conjures and the way it annoys me with its presumptuousness.

“Hallelujah” has less in common with Christmas tunes than it has with those timeless songs—“Imagine, “Let It Be,” “Bridge over Troubled Water”—in which melody and lyrics are a cohesive whole.

Songs that conjure the holiday season have lyrics intended to be catchy, not profound (at least when they’re not overtly religious in their reminder of how Christmas came to be and why it’s celebrated).   They bring us to a place of longing and innocence in a Brenda Lee “Jingle Bell Rock” kind of way.

And here’s the kicker.  For all my whining, a switch of the radio dial is all it takes to surprise me with an ear-opening lesson in what happens when silly lyrics get lost in pure melody.  It is nothing short of a revelation to hear Bill Evans’ playful piano rendering of “Santa Claus Is Coming to Town” or Sonny Rollins’ saxophone crooning “Winter Wonderland.”

If I can’t completely escape the gods of commerce that mess with our sense of perspective, I can be thankful that I have the choice to not buy into holiday mishigoss and the baby steps it takes to bring me to new ways of hearing and seeing, We may all be tired of wearing masks—and most don’t these days—but getting past the collective trauma of 2020, and the fear of a virus that still dominates headlines takes time. There’s still too much sadness and cynicism and anger in our world. All the more reason to wish for some grace in our transition into a new year.

Just don’t get me started on “Auld Lang Syne.”