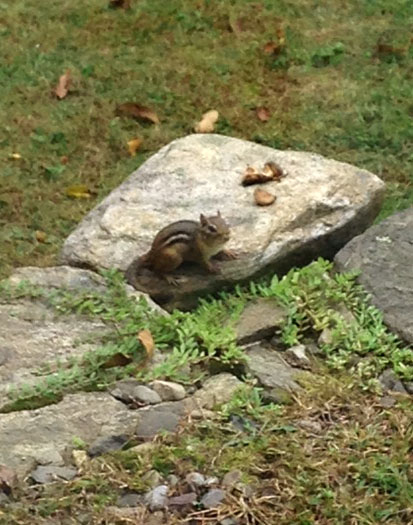 The transition from one season to the next is always a reminder of something fluid, even elusive. Sure you wake one day and the calendar tells you it’s autumn, this year’s arrival last week still in the afterglow of the Harvest Moon.  But it’s not as if you haven’t already sensed it, the shifting light, the shortening of days.  It’s a lot like the space between breaths that sometimes becomes the focal point during meditation. If you pay attention, breathing in can only become breathing out. And vice versa.

So it goes with the slipping of summer into autumn.  By late August there’s a diminished vibrancy to the lush green of the leaves; mid-September the ache kicks in, that fading to yellow, a reminder that leaves may be dying but we still have that riot of red and orange, yellow and brown against that seasonal golden light to look forward to.    A quote I came across the other day by the Chinese philosopher Lin Yutang sums up so eloquently the way I feel:

“I like spring, but it is too young. I like summer, but it is too proud. So I like best of all autumn, because its leaves are a little yellow, its tone mellower, its colors richer, and it is tinged a little with sorrow and a premonition of death. Its golden richness speaks not of the innocence of spring, nor of the power of summer, but of the mellowness and kindly wisdom of approaching age. It knows the limitations of life and is content. From a knowledge of those limitations and its richness of experience emerges a symphony of colors, richer than all, its green speaking of life and strength, its orange speaking of golden content and its purple of resignation and death.”

It’s a busy time for chipmunks and squirrels, I’ve noticed, a kind of rush hour as they scamper and scurry back and forth, in and out, so much to hoard. It’s a noisy season, too, lawnmowers still cutting the last bits of summer grass before the leaf blowers take over.  Who needs an alarm clock in the morning when you have crows?

A few weeks ago, Labor Day to be exact, I was sitting on my deck, early morning. Sipping coffee and reading.  Something made me stop.  Look up.

More often than not what distracts me is something I see or hear: a  squirrel doing acrobatics across tree branches. A majestic hawk circling the sky.  A woodpecker rat-tat-tatting.  Deer passing through my yard.  A tree being trimmed.

On that particular day, the memory still vivid, it was the complete absence of usual morning sounds that enveloped me.

Not a car thrumming down the road.

Not a dog barking.

Nada, when it came to sound.

That I could be so caught up in its absence was a curious reminder, ironic as it seems, that I’m not alone. “The world is too much with us,” wrote Wordsworth, and that was way before technology wreaked havoc on our neurology: Being present to the moment is a far cry from the beeping urgency of text messages.  The immediacy of sending e-mails brings an expectation of response in a timely fashion, the question being: whose time frame is it anyway?

Years ago I read A Circle of Quiet by Madeleine L’Engle,  drawn to the title.  At the very beginning she writes:

“I like hanging sheets on lines under the apple trees—the birds like it, too. I enjoy going out to the incinerator after dark and watching the flames; my bad feelings burn away with the trash. But the house is still visible, and I can hear the sounds from within; often I need to get away completely, if only for a few minutes. My special place is a small brook in a green glade, a circle of quiet from which there is no visible sign of human beings.”

The quiet a writer needs to do her work was at the heart of a conversation between novelist/filmmaker/Buddhist priest Ruth Ozeki and editor/novelist Carole DeSanti, hosted by WNBA-NYC.  “Real creative work comes from a quiet place,” said DeSanti.  We may need the noise, that “conversation with the world,” as Ozeki put it, at the start of a project.  “But at the end I need quiet to dig in.”

“Silence is an endangered species,” says acoustic ecologist Gordon Hempton in an interview with Krista Tippett that begs to be listened to.  “Silence is not the absence of something but the presence of everything,” he explains, taking listeners on a virtual hike through the Hoh Rain Forest in Olympic National Park to what he calls One Square Inch of Silence.  It’s through silence that we regain the power to listen.

“Now we will all count to twelve/and we will all keep still. . . .” begins a Pablo Neruda poem that Jewish-Buddhist teacher Sylvia Boorstein is said to carry with her everywhere she goes. Listen to her recite it. Or read it here.

The poem, a favorite of mine, is called “Keeping Quiet.”