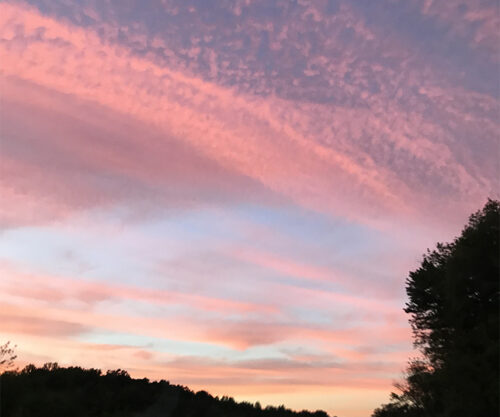 Yesterday’s walk found me unsettled at the sight of a sign — estate sale pickup – in the driveway of a house I pass by all the time. Cars were lined along the road.  It’s been many months since I’ve seen my neighbor, who I often chat it up with if she’s out during my walk.  I knew they’d been trying to sell the house. Estate sales take me to a place of narrative distress. Isn’t that a last resort? And how is it I know so little about what’s going on just outside my own backyard?

Today a large moving van takes up the driveway of neighbors down the hill.  A young family that moved in barely a year and a half ago, they’re leaving for reasons I may never really know. Not that we didn’t come up with some juicy narratives when the ‘for sale’ sign went up. Divorce? Job relocation? It was all so enthusiastic when they first bought the house—a shared glass of wine, talk of a meal or two together.  One little girl and another child on the way can’t help but energize a cul-de-sac now that the kids raised here are all grown up and gone. All the speculation re: these here today/gone tomorrow neighbors not wanting to get too close once they knew they were leaving does little to negate the discomfort, even sadness, at their departure.

Empty houses speak of loss. The need for narratives, even if they’re far afield, is built into our DNA, storytelling species that we are. And, yet, Pema Chodron, in her meditative wisdom and guidance, reminds me that letting go of narratives, so often rooted in patterns that reinforce our Very Important Story Lines, is instrumental in moment-to-moment awareness that brings liberation.

The rest is fiction.

In Alan Lightman’s latest book of essays, Searching for Stars on an Island in Maine, he describes an experience that, to my thinking, amounts to a transcendent moment. He was in his boat during the “wee hours” of a summer night:

“No one was out on the water but me. It was a moonless night, and quiet. The only sound I could hear was the soft churning of the engine of my boat. Far from the distracting lights of the mainland, the sky vibrated with stars. Taking a chance, I turned off my running lights, and it got even darker. Then I turned off the engine. I lay down in the boat and looked up. A very dark night sky seen from the ocean is a mystical experience. After a few minutes, my world had dissolved into the star-littered sky. The boat disappeared. My body disappeared. And I found myself falling into infinity.”

I had the pleasure of getting to know Alan during the summers our daughters spent at a camp in Maine. Parents’ visiting weekend was something I looked forward to. The first one still makes me laugh at the memory of my jumping out of our car as we snaked our way out when the weekend ended. My husband, a regular guy by all measures, nonchalantly asks, “Did you know Kara’s father was a writer?”  The realization that I’d been chatting it up with Alan Lightman without knowing it hit me like a thunderbolt. The cars were moving slowly enough for me to get out, walk up to the Lightmans’ car, not too far ahead, just to let him know how much I loved Einstein’s Dreams.

What he does so lucidly and beautifully in his latest work is explore our longing for Absolutes despite the uncertainties and ambiguities our world presents us with. Reconciling scientific truths with spiritual/religious experiences is easier said than done.

As to making personal sense of it all, well, that’s the reason some of us take to writing.  “My Vocation,” an essay in Natalia Ginzburg’s The Little Virtues, begins with these words:

“My vocation is to write and I have known this for a long time. I hope I won’t be misunderstood; I know nothing about the value of the things I am able to write.”

From that starting point, Ginzburg takes the reader through the whys and hows of her stories, including how she moved away from wanting to write like a man. Near the end, she has this to say:

“When I write something I usually think is it very important and that I am a very fine writer. I think that happens to everyone. But there is one corner of my mind in which I know very well what I am, which is a small, a very small writer.” Even so, she adds, “I prefer to think that no one has ever been like me, however small, however much a mosquito or a flea of a writer I may be. The important thing is to be convinced that this really is your vocation.”

Ginzburg has more to say about vocations, and relationships, and children, and, yes, shoes, in this gem of a collection, and Belle Boggs, in a New Yorker essay, makes a great case for “The Book That Taught Me What I Want to Teach My Daughter.”

The essence of a transcendent moment is a sense of wonder, quiet in the way it takes hold.  If you’re a writer you can’t help wanting to share the insight or revelation it brings, maybe even concoct a story. It’s the ultimate paradox: try to capture the essence of a moment and you’ve lost it.

Maybe the world began with a Big Bang, maybe not. And maybe it will end with a whimper.

Maybe Bob Dylan is right when he says, in an interview moment during the new Martin Scorsese documentary: “Life isn’t about finding yourself or finding anything. It’s about creating yourself.”

Empty houses also speak of lives created. They echo with family dramas, barking dogs, purring cats. Echoes etched into the walls of rooms cleared to make space for the next chorus of laughter and tears.

Note bene: With this post, I’ll be taking a little break from my regular blogging schedule. Maybe you’ll miss me, maybe not :-). But I would be remiss in not at least letting you know that my novel has earned another honor, a Finalist/First Novel, 2019 Next Generation Indie Book Awards. Smack in the middle of Gay Pride Month seems as timely as it gets to read and/or recommend the novel.