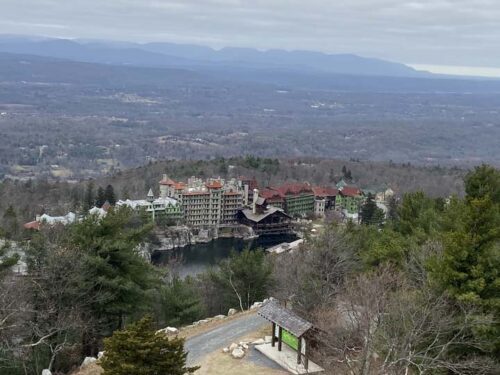 I’ve been hankering road trips lately, before winter really sets in.  Something about being on the road, playlists at the ready, lifts me from a certain melancholy that kicks in this time of year. I relish holiday gatherings with family and friends who have become family, but there is no escaping the mixed blessing that generational drift, coupled with generations gone, evokes.

Last weekend found me on the road with my husband, headed north, Mohonk Mountain House, our thirty-fifth anniversary celebration. By coincidence, the weekend was billed as a ‘couples’ romantic getaway.’  The setting is idyllic, even if the activities billed for the weekend were a little too precious for our taste. ‘Love Birds Walk’ (7:30 a.m.), not a chance.  While other couples might be finding harmony in art via a workshop, ‘Unity in Creativity’ (10:30 a.m.), we would be just finishing breakfast, ready for our own leisurely walk around the lake.

‘Beer Tasting’ (5 p.m.) might have been tempting if not for the fact that my husband doesn’t drink.  Good time for him to take a nap and for me to go to a meditation class.

Turns out that ‘Tomahawk Throwing’ is a regularly scheduled, popular afternoon activity. Turns out, too, that our room is the one Stephen King apparently stays in whenever he visits Mohonk. Oh what a silly thrill. You could almost feel his presence, a kind of haunting.

I asked myself, what would Stephen King make of, or do with, the infant crying in the adjoining room? On a couples’ weekend, to boot. Putting aside disturbed sleep, would he be touched by the tenderness and need in all its innocence? Then again, he apparently takes the adjoining room as well so he would never have to hear what’s going on next door.

All glibness aside, Stephen King is a master of narrative pulse and the telling detail.  My appreciation for him grew to new heights when I read his review of Donna Tartt’s The Goldfinch. I subsequently read On Writing: A Memoir of the Craft.  I keep a copy on my desk (along with Patti Smith’s Devotion, William Blake Poems selected by Patti Smith, Dinty Moore’s The Mindful Writer: Noble Truths of the Writing Life, Francine Prose’s  Reading like a Writer, and Brave Enough by Cheryl Strayed.)

“What I want most of all is resonance,” writes King, “something that will linger for a little while in Constant Reader’s mind (and heart) after he or she has closed the book and put it up on the shelf.” I could not say it better myself.

There is some serendipity here. Keyword searches for a projected Just Like February advertising campaign on Amazon have me in a tizzy. Coming-of-age novels have an appeal to both adult and teen/young adult readers and their reach is broad. Stephen King’s The Body, incarnated into a favorite movie of mine, Stand by Me, is a coming-of-age story. It seems, too, that Donna Tartt’s The Goldfinch falls within the parameters of innocence-to-experience tales. So strong is the genre that sites like Literary Hub will enumerate The 50 Greatest Coming-of-Age Novels of All Time.

It’s a humbling thing to be a writer.  And Madeleine L’Engle says it so honestly and eloquently in A Circle of Quiet:

I think that all artists, regardless of degree of talent, are a painful, paradoxical combination of certainty and uncertainty, of arrogance and humility, constantly in need of reassurance, and yet with a stubborn streak of faith in their validity, no matter what. . . .And I think, too, and possibly most important, that there is a faith simply in the validity of art; when we talk about ourselves as being part of the company of such people as Mozart or van Gogh or Dostoevsky, it has nothing to do with comparisons, or pitting talent against talent; it has everything to do with a way of looking at the universe.

After my encounter with Stephen King, you would think I might plunge right into The Shining, get a jolt of adrenaline to jump-start a new story. But no. In the way that Erin Morgenstern’s The Night Circus completely captivated me, The Starless Sea, her latest work, pulled me right in.  In preparing to work on the new novel, the heart of which is the nature and creation of stories, she relocated to a house that was not wired for internet. And she played video games.

There’s magic, indeed, in reading. And there’s a sense for me of not so much being inspired by as infused with the words of writers who move me.

There’s magic, too, in the way we find kindred spirits in online writing communities.

I’ve had the pleasure of knowing Jayne Martin, a gifted writer of flash fiction, for several years now. It takes a very particular skill and mindset to compose stories that pack so much in a single paragraph, or a few. Her first collection, Tender Cuts, was recently released. And it’s a gem. I could say, without equivocation, too, that these are stories with resonance.